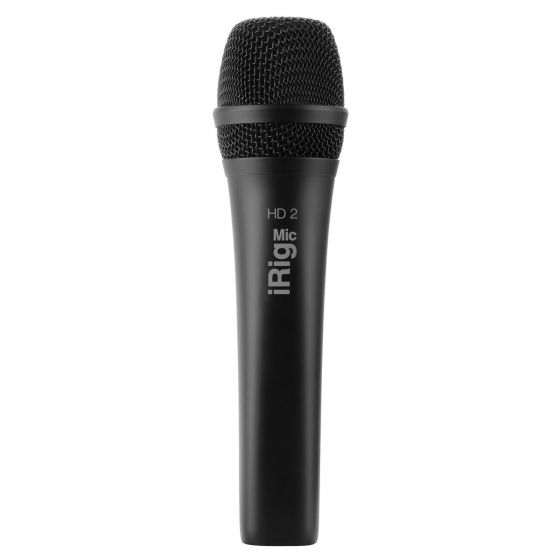 The IK Multimedia iRig Mic HD 2 for iOS is a compact and portable, premium-grade microphone designed for use with iOS devices, as well as Mac and PCs. The iRig Mic HD 2 provides superior audio fidelity thanks to it's the high-definition 24-bit. Recording and 96khz sampling rate. The handheld design is ideal for a range of applications, from recording vocals to interviews on the move. It boasts on board gain control as well as integrated headphone connector and volume control. Its unique design makes it the only handheld USB digital condenser microphone available on the market.

Superior Sound Quality
The IK Multimedia iRig Mic HD 2 for iOS is the only handheld condenser microphone available on the market. It provides you with exceptional audio fidelity thanks to the high-definition 24-bit/96kHz audio fidelity. The premium-grade digital converters provide immense clarity and attention to detail, making it ideal for a wide variety of recording applications. It connects seamlessly to a range of equipment including the iPhone, iPad, Mac and PC. The low nose preamp ensures optimal signal integrity and the gold-sputtered electret condenser capsule captures every nuance of your source material. With its versatile design, the iRig Mic HD 2 is ideal for both stage and studio applications.

Various Recording Applications
Because of its high sensitivity and superior sound quality, the iRig Mic HD 2 is suited to various recording applications. The microphone can withstand sound pressure levels of up to 125dB, more than enough room for high volume environments. The condenser capsule provides exceptional transient and frequency response, with the low-noise preamp allowing you to dial in the correct amount of signal level as you require. With that said, the iRig Mic HD 2 is suited for a wide variety of recording applications. Take the microphone on the move with you and record directly to your iPhone for interviews, found sounds, live performances and more. It is also great for recording vocal recordings, music demos and even podcasting.

Audio Software Suite
To get you started straight away, IK Multimedia have included a range of high-quality audio software for recording and editing. iPhone, iPad and iPod touch users can use the included versions of the Mic Pack for VocaLive, allowing you to process vocal recordings, add effects, virtual microphone models and more. The Pro Bundle for iRig Recorder is also included providing added processing such as equalisation, compression, audio recording and more. Additionally, the microphone comes complete with Ableton Live 9 Lite and T-RackS classic collection of audio processing plug-ins for PC and Mac users.

Rugged Construction & Connectivity
The rugged yet sleek construction also features an integrated headphone output with independent level control, allowing you to monitor your audio signal straight from the microphone. It can also be used to send the signal to an external device such as another recorder or mixing console. It is also highly compatible, boasting a wide range of connectivity. You can use the iRig Mic HD 2 with all iOS devices including iPhones and iPads. It will also work with both Mac and PC computers. The microphone comes complete with a Lightning iOS cable, USB cable, table tripod, mic stand adapter, storage patch and thread adapter.