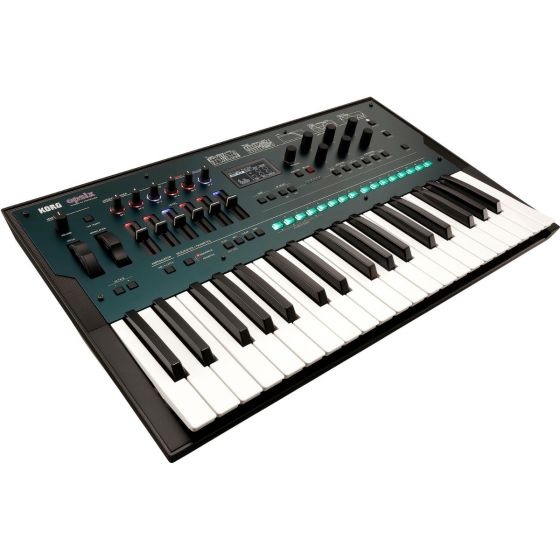 The Korg OPSIX is an altered digital FM synthesizer that features a true 6-operator sound generator with a diversity of waveforms and operator modes that goes far beyond the realm of standard FM, making it well suited for sound designers, producers, and musicians. The OPSIX offers the editing simplicity of analog synthesis to control the power of the FM engine.
There are six sets of knobs and sliders on the OPSIX panel, each with two-colored LEDs, which help you quickly and clearly see the relationships between operators, whose roles change with each algorithm. Make direct changes to the pitch and volume for carriers and to the brightness of the sound or strength of the harmonics for the modulators. These controls give you sonic control over the unpredictability of FM just by subtracting and adding sounds as if you were using a mixer or drawbars.

There are 5 operator modes that expand beyond the traditional FM sine waves and include FM, ring modulation, filter, filter FM, and wave folder, as well as a wide range of waveforms. There are also 40 preset algorithms and user algorithms, which provide a combination of different operator roles and connections.

Beyond FM, the OPSIX provides a wide range of analog-style modulation controls and filters including three ADSR envelope generators, three LFOs, and 12 virtual patches for a huge range of modulation sources. The 11 filter types include the radical MS-20 low-pass / high-pass filter, to the powerful yet soft Polysix low-pass filter that gives your sound a vintage feel; as well as two- or four-pole low-pass, high-pass, band-pass and band reject filters with resonance.

The OPSIX includes 30 high-definition effects of which three can be used simultaneously. You'll find stand offerings such as compression, EQ, chorus, flanger, phaser and stereo delay, as well as distinctive effects like rotary speakers, grain shifters, and shimmering reverb effects that add a new dimensions to already remarkable sounds.

The powerful 16-step polyphonic sequencer allows you to record up to six notes per step, edit the velocity, gate time, and playback timing for each note, allowing you to create long phrases, or make subtle shifts in timing to emulate strums or drum rolls. A motion sequencer lets you record up to six parameters, creating smooth motion changes in sound within a phrase or building rhythms that change dramatically with each step.

Other notable features include randomization, which provides you with unexpected sonic discoveries at the touch of a button and a spectrum analyzer and oscilloscope which provide visual feedback to the distribution of harmonics that are caused by modulation, drawing you into a deep synthesizer vortex. The OPSIX ships with a 12 VDC power supply and includes a free bundle of music software including Korg's Gadget 2 LE, Module, and M1 LE collection, as well as Reason Studios Reason Lite, and iZotope Ozone Elements mastering software.